Two scraps of a medieval manuscript salvaged from the binding of a 16th century copy of the pseudo-Bonaventuran Meditationes Vitae Christi.

I use this page to share some of my academic interests and ongoing projects, mostly in the area of late medieval literature and culture. The illustrations are from my very small collection of medieval manuscript fragments and leaves.

My research focuses on the religious culture in the late medieval period, c. 1350-1550. I am particularly interested in Middle English religious and mystical writing, performance and affective forms of devotion, religious lyric religious, religious drama, Lollardy and heresy, medieval theology and intellectual history in general. With Ian Johnson from the University of St Andrews I have published a volume of essays entitled The Pseudo-Bonaventuran Lives of Christ: Exploring the Middle English Tradition. This publication investigates the literary tradition of Middle English Lives of Christ in its cultural, theological, and manuscript contexts. A related research interest is in the areas of book history and the history of reading. Some of my most recent research consists of a number of case studies that looks at the book collections and reading practices of a Catholic community in nineteenth-century New Hampshire. This has appeared as Books and Religious Devotion: The Redemptive Reading of an Irishman in Nineteenth Century New Hampshire (Penn State University Press, 2014).

I have taught at universities in Poland, Denmark, and the University of St Andrews. My teaching has focused on subjects of medieval and early modern literature, from Old English writing to John Milton. I have also taught survey courses on British literature from the Anglo Saxon period to the present, and contributed to seminars on literary theory and the history of the English language.

With the Reformation (often proclaimed as the triumph of the printed book) it was common for discarded medieval manuscript to be cut up and used as part of book bindings. 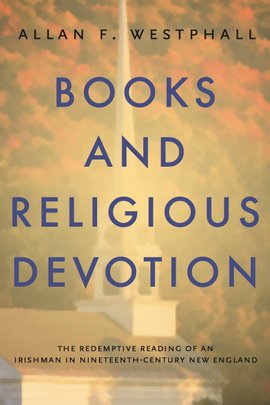 Books and Religious Devotion is a study of a remarkable book collection of a nineteenth-century New England farmer, Thomas Connary. Through a detailed reconstruction of how this Irish Catholic immigrant read and annotated his books, the study gives new insight into the capacity of books for structuring a life of devotion and social participation, and it presents an authentic and holistic view of one reader’s interior life. 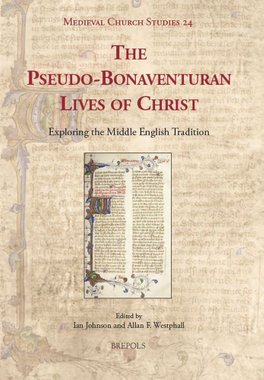 This is a collection of pioneering studies by a distinguished transatlantic team of scholars on a neglected yet canonical tradition of medieval English literature. From the fourteenth to the sixteenth centuries and beyond, the remarkable ‘pseudo-Bonaventuran’ tradition, flowing from the Latin Meditationes vitae Christi (and thought, wrongly, to have been composed by St Bonaventure), gave Europe orthodox models for how to represent, know, and follow Jesus Christ. How to live, what to believe, how to feel, and how to be saved: this eloquent mainstream tradition had an impact on the public and private lives of English people more profound and lasting than any text save the Bible itself. For many, it even did the Bible’s work. The tradition of the Meditationes provides us with a gauge of lived religious sensibility without equal in the English later Middle Ages. 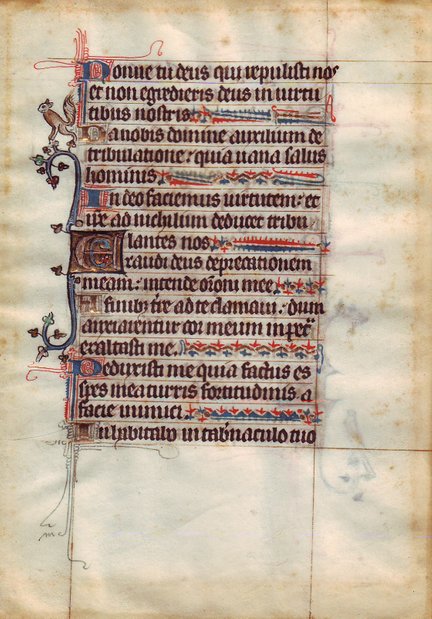 A verso leaf (10 x 14 cm) from a medieval prayer book (known as a book of hours) c. 1400. The prayers are in Latin and the page shows an illuminated initial 'E'(xaudi) with floral ornamentation and an image of a squirrel. Click here for an image of the recto. I assume the animal motifs are medieval and not drawn in later, but I cannot be certain.

The page contains the words from Psalm 59-60, beginning 'Nonne tu Deus qui repulisti nos et non egredieris Deus in virtutibus nostris. Da nobis auxilium de tribulatione et vana salus hominis. In Deo faciemus virtutem et ipse ad nihilum deducet tribulantes nos'. ('Wilt not thou, O God, who hast cast us off? and wilt not thou, O God, go out with our armies? Give us help from trouble: for vain is the salvation of man. Through God we shall do mightily: and he shall bring to nothing them that afflict us')

The book of hours is the most common  type of surviving medieval manuscript, and it was used to structure daily religious prayer for people at most levels of society, very often women. Often the books of hours are found with lavish illustration, sometimes with full-page miniatures.

It is unusual for a book of hours to contain Psalms 59-60; most often it contains only the seven so-called penitential psalms (6, 32, 38, 51, 102, 130, 143). It is possible, therefore, that this page is in fact from a medieval psalter, another common type of manuscript containing the Book of Psalms in combination with other devotional materials.

Although my main specialist area is the literature and culture of late-medieval England, I allow myself to be open to serendipity in my research pursuits. Generally, it is my conviction that allowing an openness to interdisciplinarity and new research paths can make one more curious, perceptive, and open-minded.

A recent research project of mine examines the publication of Irish Catholic literature in New England in the nineteenth century, and it focuses on one remarkable collection of enhanced and annotated books owned by an Irish immigrant by the name Thomas Connary (1813-1898). In my forthcoming book Books and religious Devotion: The Redemptive Reading of an Irishman in Nineteenth Century New Engand I examine the book collection of this Irishman who settled as a farmer in New Hampshire, and I apply methods of medieval text and manuscript studies to this much later material. The motivation behind this work is my belief that the deep understanding we acquire in medieval studies about the material culture of the book and the dynamics of book production and dissemination can be of the highest value, theoretical and applied, outside of our narrow disciplinary boundaries. 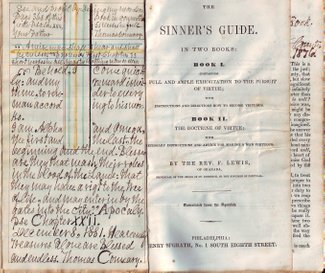 A leaf (6.5 x 9.5.cm) from a manuscript of Latin liturgical chant with an example of the medieval notational system. 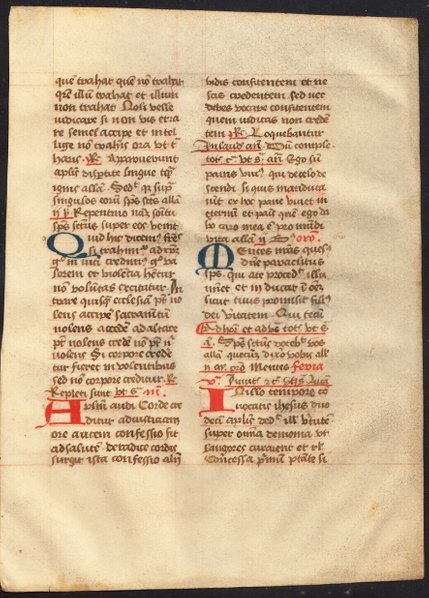 A leaf from a Latin religious manuscript, known as a breviary, measuring 11 x 15 cm. with large painted initials in blue and red. The breviary was a liturgical manuscript used throughout the middle ages and it contained a medley of psalms, hymns, and prayers, as well as scripture lessons and quotations from church fathers. This illustrated recto contains extracts from St Augustine’s In Iohannis Evangelium tractatus. Click here to see the verso. I'm unsure where this leaf was produced but I think it's fifteenth century. 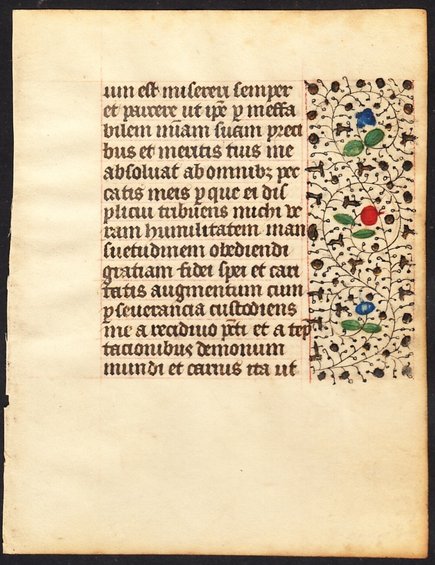 The recto of a leaf from a small beautiful French book of hours of c. 1500, which measures 8.5 x 11 cm. Showing part of the text from the prayer O Intemerata (O undefiled and forever blessed). This was a highly popular prayer to the Virgin Mary found in nearly all books of hours, and this leaf shows the passage 'Tribuens mihi veram humilitatem, veram mansuetudinem et obediendi graciam' - (bestow upon me true humility, true mildness, grace, and obedience). A decorative light floral design with gold leaf adorns each margin of the text. Click here for an image of the verso. 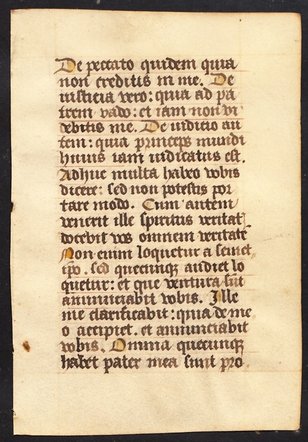 A tiny leaf from a miniature Latin Bible manuscript that measures no more than 6.5 x 9.5cm. The page begins with John 16.9 ‘De peccato quidem quia non credunt in me’, which is part of the King James Version ‘And when he is come, he will reprove the world of sin, and of righteousness, and of judgment, of sin, because they believe not on me.’ The origin of this leaf is uncertain but I’m guessing France sometime around 1450. Click here for an image of the verso which contains John 16.15-16.19. 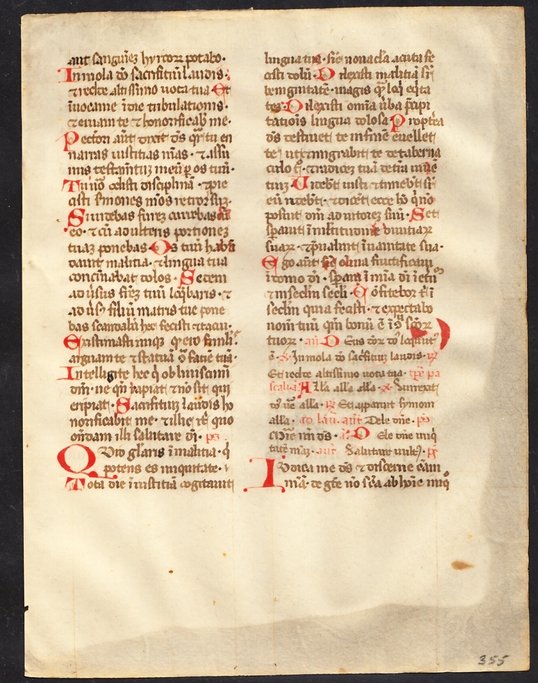 A leaf from a Latin liturgical manuscript, 10 x 13 cm. The manuscript was probably a psalter or a breviary. It was written with a small, compact and regular script with large red initials and smaller red initial letters to indicate paragraphs. Click here to see the other side.

an interesting detail is that the first scribe, who was responsible for the main text, wrote the initial letter in a tiny script with ample space around it to allow for the decorator (who was probably another monk) to insert the larger coloured initial on top of it at a later stage in the manufacture of the manuscript.