A visit to Hong Kong in September 2014 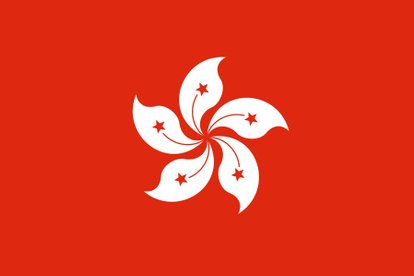 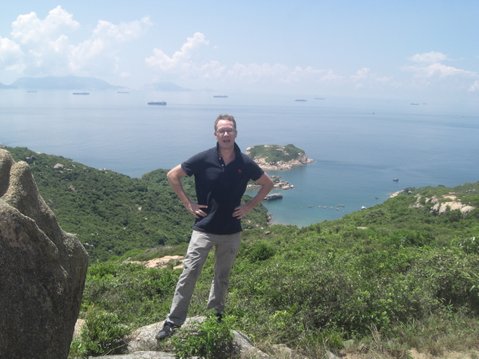 I visited Hong Kong for four days in the beginning of September 2014. I wanted to go there as an explorer and time-traveller.

I have visited Hong Kong many times over the last years, and much of the city is superficially familiar to me. This time I wanted to go to pay attention to some things less seen; or, if often seen, then less noticed.

Among the places I visited this time were the mysterious isle of Po Toi, a Zoroastrian cemetery in Happy Valley, a non-trafficked road on the Peak with a mossy chair and a haunted house, an exclusive correspondents club, and an old prison which is having its guts torn out.

My impression of Hong Kong has for long been that of a place with no deep consciousness of its own history: it is a place of transit for many and there are many materialistic distractions that make it easy to miss the city’s historical layers.

But on the other hand, to say that Hong Kong is a city that focuses on the present and looks to the future, while disregarding the past, is too simple and to a large degree incorrect. For instance, in many of the districts and metro stations there are information boards with old pictures of the city and historical information. These are initiatives among many to ensure the existence of a collective memory and an appreciation of a unique Hong Kong heritage.

This is a time with much discussion about the differences between Hong Kong and mainland China, and a time when the political system and civil liberties are being increasingly impacted by Chinese governance. Perhaps, at such times, the Hong Kong citizens become especially conscious of their distinct identity and cultural heritage. 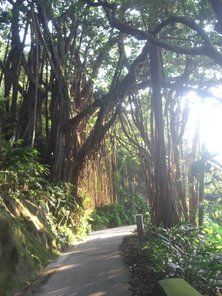 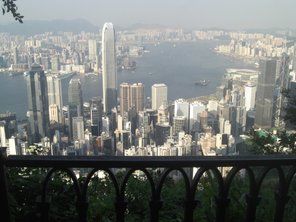 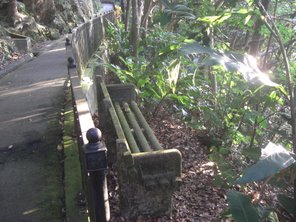 Lugard Road is a promenade path on Victoria Peak named after Sir Frederick Lugard, Governor of Hong Kong 1907-1912. Constructed 1913-21 (with construction halted during the First World War) it runs about 400 meters above sea level and follows the contours of the hillside. I was happy to find cool breezes and a stunning panorama over Victoria Harbour. Dragonflies and damselflies buzz about in great numbers and in the dense tropical vegetation I spotted large banyan trees and the evergreen camphor tree. According to an information board on the road, the oil from the camphor tree ‘can drive away pathogenic winds, dispel colds, strengthen the heart, arrest spasms and kill pests’.

On Lugard Road, I found a bench from the time of the construction of the road, covered by some ivy and a thick layer of green smelly moss; it looks like it hasn't been sat on since colonial times. This is a scenic bench, made of concrete and with the planks in imitation of bamboo branches, a type seen today in most public parks in China. Many a colonial administrator must have sat on that bench, perhaps Lord and Lady Lugard themselves: it is from a time when the Peak was an exclusive residential area for Europeans and government officials (no longer so from 1946). 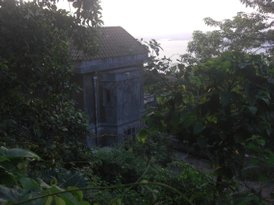 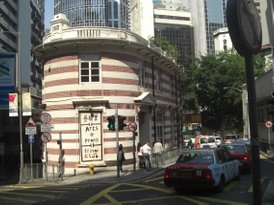 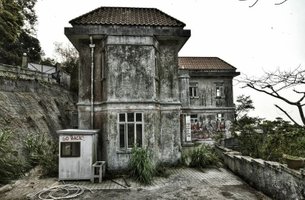 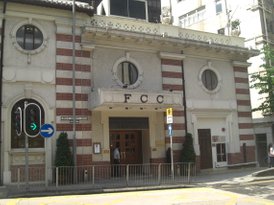 32 Lugard Road is a pre-war mansion on the Peak hillside, built like a fortress, capable of withstanding typhoons. It is known as Dragon Lodge and has been abandoned for many years. Curiosity got the better of me and I climbed a fence to take a picture (I dared not enter the house!). My later research suggests that the house may be haunted: it is claimed that it was occupied by Japanese troops during the invasion, who executed a group of hapless Catholic nuns in the garden. 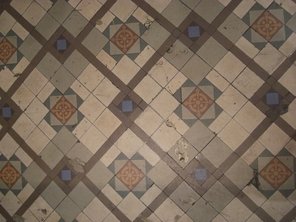 Upstairs, behind the infamous bar street Lan Kwei Fong, is the old Ice House, built in colonial style circa 1890 as a cold storage warehouse. The house is a superb example of repurposing and historical conservation of which very little remains in HK. Today it houses a culture centre and the exclusive Foreign Correspondents’ Club. I managed to get into the FCC's main bar, but was chastised for my casual attire and I wasn’t allowed to order a drink. It is as it should be. I hadn’t come for the drinks but to see the original Edwardian floor tiles, and they didn't disappoint! In defiance of regulation I took a picture of the floor; there’s just no stopping me! 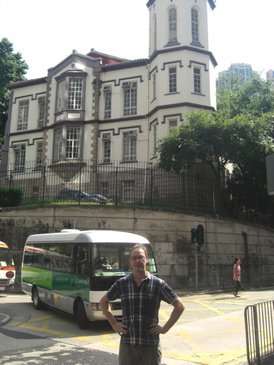 Reputedly the second oldest residence in Hong Kong from 1843-48, this is the home of Hong Kong's Anglican bishop. I wonder if there is a library in there and if they allow visitors. The building was also a school for many years.

Three Chinese ladies with handbags on the stairs of Duddell Street. The Victorian gaslights are the only ones remaining in the city today and are still fuelled by the Hong Kong and China Gas Company. 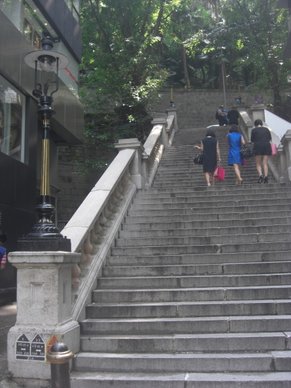 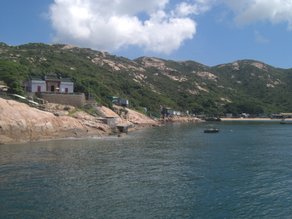 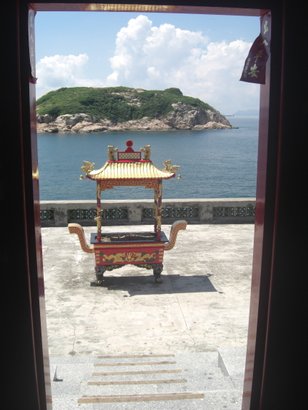 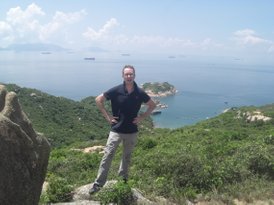 Po Toi is the largest of a scatter of islands south of Hong Kong Island. It is one hour by ferry from the pier in Aberdeen.

The day I visited Po Toi, I encountered mostly birds, exotic reptiles, butterflies and dragonflies. But signs of human activity are all around: ancient rock carvings date back to the bronze age and only a few decades ago the island had a population of about 1000 souls, almost exclusively fishermen and farmers. The diminutive schoolhouse, now abandoned, bears witness to some past activity.

Close to the main bay of Tai Wan is a Tin Hau temple, one of about 100 such in the Hong Kong territory dedicated to the Chinese goddess of the sea. When I was there, a small group of elderly volunteers had come over on the ferry to tidy up the temple, sweep the floor, replenish the incense sticks, and put out fresh fruit offerings (apples, pomelos, oranges) to Tin Hau who is obviously a vegetarian (or vegan?). 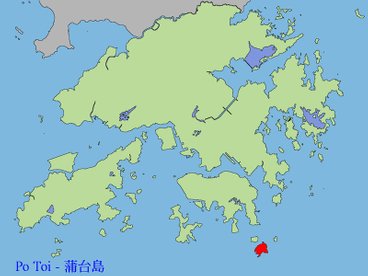 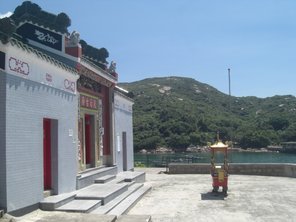 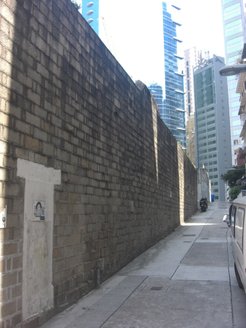 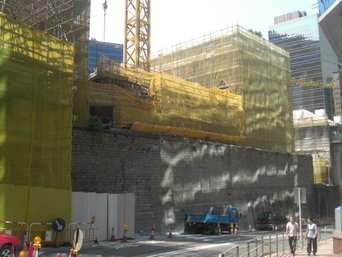 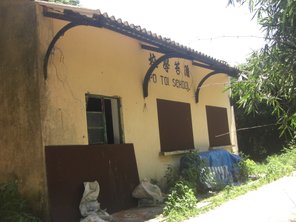 Walking along Hollywood Road from Sheung Wan to Central, I arrived at the walled complex of the Central Police Station and the old Victoria Prison. The complex was developed from 1864. My heart skipped a beat when I saw it was a big building site; perhaps a demolition to make space for more over-priced apartments and shopping malls? The horror! I talked to construction workers who assured me that it was being restored as a centre for art and culture. On the government website I read about the Central Police Station revitalisation project, designed 'to transform the unique cluster of historically significant buildings in Hong Kong into a centre for heritage, contemporary arts and leisure for the public to enjoy.' Read more here. 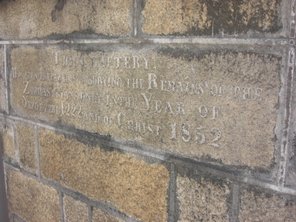 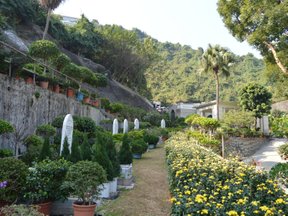 This marks the entrance of the Parsee Cemetery in which are buried members of the Zoroastrian community in Hong Kong. The name comes from the ancient Iranian prophet Zoroaster, the Greek version of the name Zarathustra, who taught about the divine creator Ahuru Mazda, and the opposition between good and evil forces. The Hong Kong Parsee community came exclusively from Mumbai as far as I can see, and worked with the British in the early colonial period. They must have been enterprising businesspeople and some prominent individuals helped establish hospitals, the Star Ferry, and Hong Kong University. This is a small, beautifully kept cemetery with strong scents of flowers and incense.

Happy Valley is the place where people (Jews, Christians, Hindus, Parsees, Buddhists) come to rest. It is a feature of Hong Kong that people live closely together, and clearly the deceased are no exception.

I found the Hong Kong Cemetery opposite the Happy Valley Racecourse in the Wan Chai district of Hong Kong. Here are graves from the colonial era, with the oldest graves from the 1840s being on the lover levels and the later ones found on terraces on the hillside. Walking in the grounds and taking one’s time, one gets a good impression of the social structure of early colonial times, especially of the upper levels of society. The important groups are army, navy, police, medical personnel, merchants, and Christian missionaries.

The impression of the cemetery is one of organised decay; many stones are toppled, graves overgrown with vegetation, the roots of trees digging deep, dislodging marble and granite stone and intertwining with human bones. Here, dead bodies squeeze, invade and engage in turf wars.

After a long search, I finally found the grave of Karl Friedrich Gutzlaff in section 13 of Hong Kong cemetery. Gutzlaff (1803-1851) was a German Lutheran missionary who worked many places in Asia: he was an indefatigable and rather eccentric missionary, remarkable for speaking Chinese and several local dialects to perfection, and, not least, for wearing Chinese traditional style clothing. 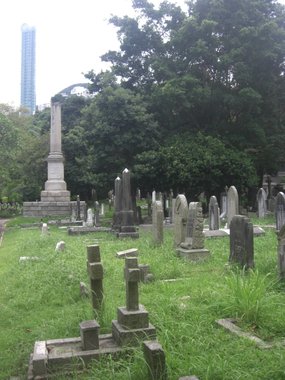 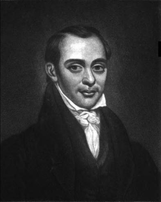 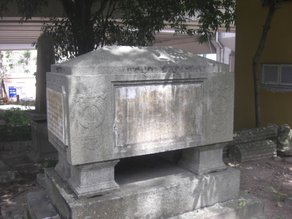 The stone sarcophagus with the earthly remnants of Karl Friedrich Gutzlaff. It is probably true to say that Gutzlaff became deeply disillusioned with the lack of progress of converting the Chinese to Christianity. Not many Chinese were willing to embrace the Christian faith sincerely, and often the distributed Bibles and religious pamphlets were sold as scrap paper. Among Gutzlaff’s biggest achievements is probably a series of books on the history, culture and topography of China which did much to increase knowledge in the West of these far-flung lands. His was a deep to commitment to education and the circulation of writing among people in Asia as well as in the West. According to my map Central district of Hong Kong has a Gutzlaff Street; I have spent hours looking for it but without success, and I can only assume that it has been renamed. 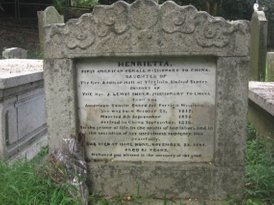 The grave of Henrietta, 'first American female missionary to China'. Henrietta was born in 1817, married at the tender age of 18, and arrived in China in 1836.

In the prime of life, in the midst of her labours, and in the meridian of her usefulness, suddenly, but peacefully, she died at Hong Kong, November 27, 1844, aged 27 years. Hallowed and blessed in the memory of the good.