In the 19th century and before, it was oftentimes the practice for several copies of long-distance letters to be written and sent by different packet boats in case of significant delays or even shipwreck. These 'duplicate' letters were often produced by the bigger trading companies with secretarial staff to copy correspondence, and they are a common phenomenon with transatlantic mail and mail between Europe and the Far East. As regards mail sent between Europe and the Netherlands Indies, this commonly went via the Cape of Good Hope, before the opening of the Suez Canal in 1869. This was an often hazardous route, known as the Cabo das Tormentas ('Cape of Storms') from the time of the Portuguese seafarers, and it was not uncommon for mail or even ships to be lost in the treacherous waters.

The small display below shows a duplicate letter and rare occurrences of triplicate and  quadruplicate letters with documented sea routings. 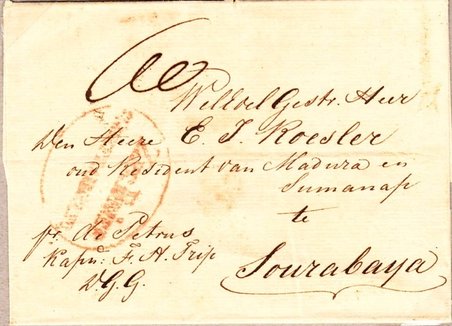 An undated wrapper with no contents sent by ship from Amsterdam to Sourabaija, c. 1850. The oval handstamp 'ZeeBrief/Ongefrankeerd' in red is known 1846-65 (Wolff de Beer 65c). The notation bottom left shows that the letter was sent by the ship De Petrus under the command of Capt. F. N. Frise. The often-seen notation 'D. G. G.', Dien God Geleiden (may God lead her) acknowledges the dangers of voyage at sea, especially at a time when mail was routed via the Cape of Good Hope.

A folded letter from the British missionary Walter H. Medhurst in Batavia, sent 6 October 1826 and arrived in London 21 May 1827. As indicated by the 'Deal/Shipletter' cancel the letter arrived in England in the port of Deal in Kent, and it was taxed at 1 shilling 4 pence for incoming shipletter. On the front is marked 'Dup(licate)': the length of the journey was over seven months, and it can only be hoped that the original letter arrived earlier. This letter, which pertains to business transactions, must have been duplicated by Medhurst himself: his longer letters that report on the activities of the mission show no signs of having been sent in duplicate copies.

The sender's note 'Duplicate!' inside the letter above the date.

Quadruplicate letter from Batavia to France.

The only example recorded. 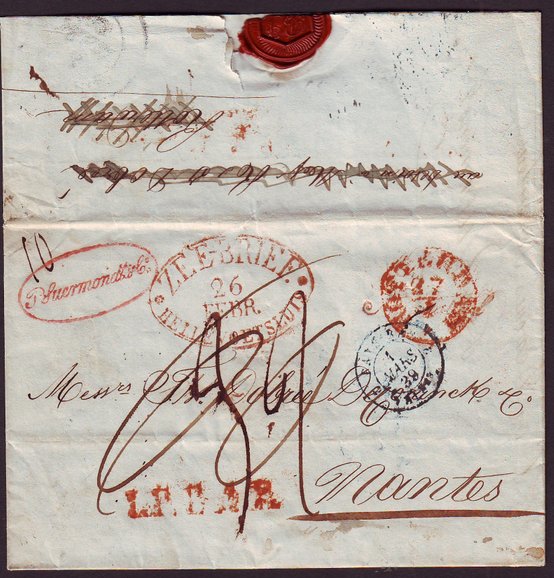 This entire is dated Batavia 5 November 1838 and sent from the Dutch trading firm Suermondt & Co. in Batavia to Nantes in France.

Between 9 April 1816 and 1 September 1850, the charge for a ship letter from Netherlands Indies to the Netherlands was 12 stuivers = 60 cents (marked on the front). The French taxation of 32 décimes covers the Netherlands-Belgian route of Rotterdam-Mons (14 décimes) and the French route of Valenciennes-Nantes (18 décimes).

This is one of four copied letters that were sent to Europe by different ships. The names of the ships are documented in a note inside the letter (see below), and this letter is the 'quadruplicate' which was sent to the Netherlands by the Dutch ship Kortenaar (this was not written in the note inside the letter). It was originally intended for expedition by the forwarding agent Messr R. & S. Dobrée in Rotterdam, but the forwarding directive on the back has been cancelled out at some stage so it is uncertain if this was followed. 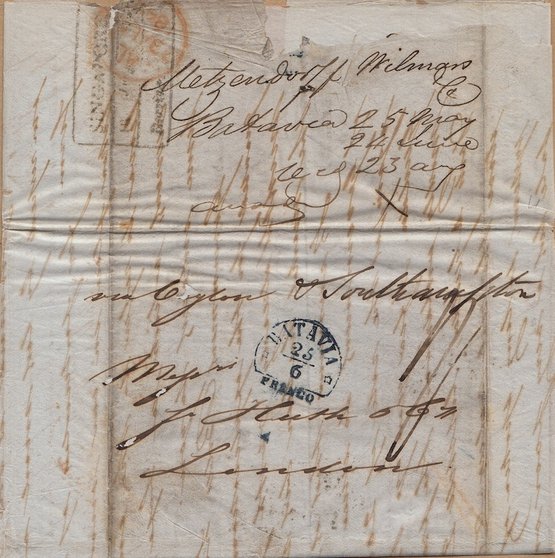 Letter dated inside 25 May and 24 June 1849 and sent from the Dutch trading company Metzendorff Wilmans & Co in Batavia. Handstamped Batavia 25 June and bearing the very unusual notation ‘via Ceylon and Southampton’. Received in London 23 August 1849. The entire went via Singapore where the square ‘Singapore bearing’ transit cancellation was applied (date unreadable).

The letter is written on very light and thin paper, and part of the letter (24 June 1849) has been written with a duplication machine, as was sometimes seen with early merchants’ correspondence (see the note ‘annexed is a duplicate of our respects’). Also inside the letter is the remark ‘per Overland Mail Duplicate’. Thus two identical letter were sent out; this original letter and a duplicate sent by the overland mail.

The recipient of the letter is Huth & Co, a company established in London in 1809 by the famous German merchant banker Johann Friedrich Andreas Huth (1774-1864). In 1849 the London office was located in 10 Moorgate in Central London. 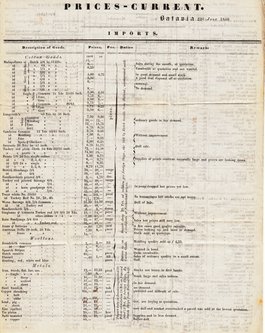 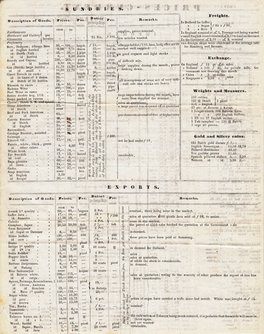 A rare preservation inside the letter is a four-page trading bulletin printed in Batavia 22 June 1849. Detailed in the print are prices of imports and exports (cotton goods, wollens, metals, and sundries), private imports and exports at Batavia by European and American ships (20 May-20 June), list of goods in entrepôt, vessels passed Straits of Sunda, and arrivals and departures at/from Batavia 20 May-20 June.

Bulletins like this were the indispensable tools of the merchants companies, as they arranged the logistic operation of their business.

Triplicate letter from Batavia to France, 1838 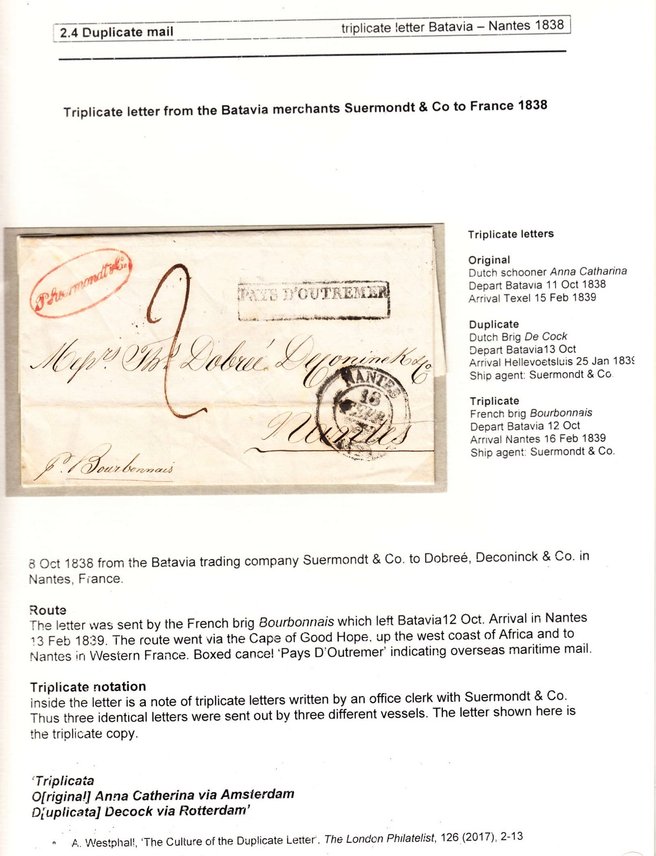 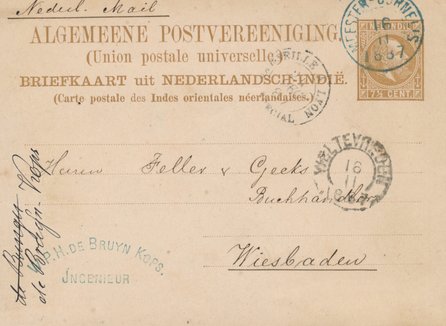 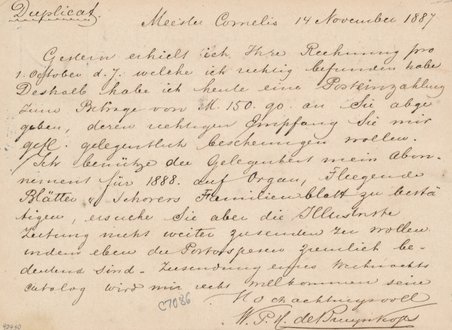 A rare example of a duplicate postcard, sent Oct. 1887 from Meester Cornelis, via Weltevreden and by train Marseille-Lyon, to Wiesbaden in Germany. The correspondence relates to payments made to a bookseller in Wiesbaden, showing again that the practice of duplicate mail occurred mostly with commercial correspondence.

(This card is not in my collection)