Cancellations on the overland letters:

The landmail route indicates mail sent over land via the Mediterranean Sea and Suez. The route was officially opened in 1844. Initially, landmail labels were affixed to overland mail received in Batavia, with indication of a charge in koper and duiten denomination to be paid on receipt. Between 1847 and 1854 landmail postmarks were in use with a value in duiten. The normal colour for these postmarks is blue but they occur also in red (rare). The landmail postmarks were accompanied by a framed route mark, indicating mail sent via Marseille or Southampton. The landmail and routing postmarks were applied in Batavia. 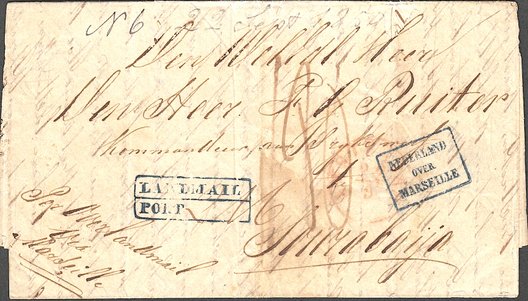 Amsterdam 22 Sep. 1850 to Sourabaja. Handwritten instruction ‘Per Overlandmail via Marseille’. ‘Landmail Port’ mark stamped in Batavia shows the standard rate of 216 duiten. Routing indicated by the boxed ‘Nederland over Marseille’ which was applied in Batavia together with the landmail postmark, both in the blue colour. 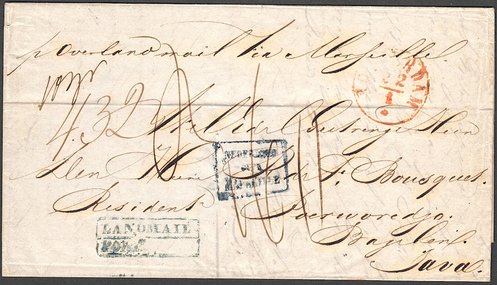 Amsterdam 12 Jan. 1851, to Poerworedjo. Overland mail via Marseille. Handwritten weight of 18 gr., making this a second weight class letter. Charged double at 360 cent (converted to 432 Indies duiten cent to be collected from the recipient.) 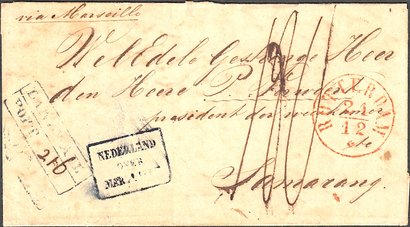 Merchant letter from Amsterdam 22 Dec. 1852 to Sourabaja. Routing ‘via Marseille and Alexandria’ in manuscript. Red ‘landmail port’ postmark with inscribed taxation of 720 duiten.

The only recorded copy of landmail charged at five times standard rate.

Rotterdam 21 Dec. 1850 to Samarang, sent by overland via Marseille and stamped with boxed ‘Nederland over Marseille’ and ‘landmail port’ with a 216 duiten taxation. A standard usage. 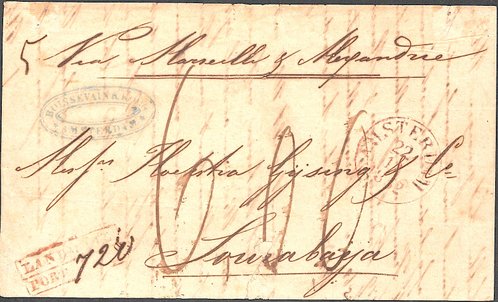 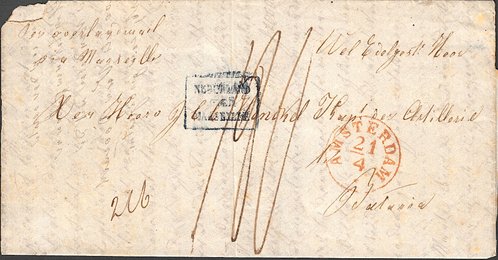 Amsterdam 20 Feb. 1851 to Batavia. Sent by the overland mail route via Marseille. Stamped with the boxed ‘Nederland over Marseille’, but unusually the ‘landmail port’ postmark was not used. 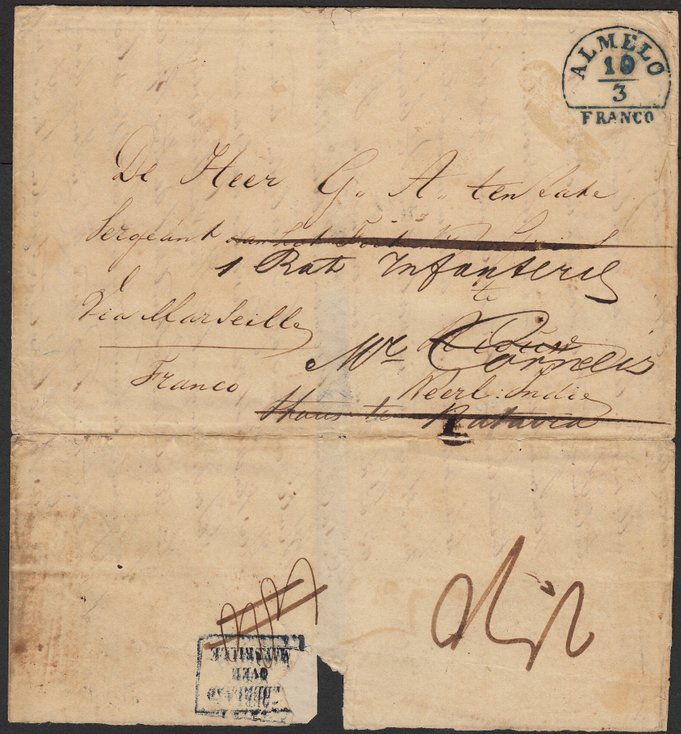 Landmail letter from Almelo in the Netherlands to a military person in Batavia and re-directed to Mr Cornelis. No 'landmail port' mark struck here, but the routing mark 'Nederland over Marseille' struck on reverse.