The number cancels of the Netherlands Indies 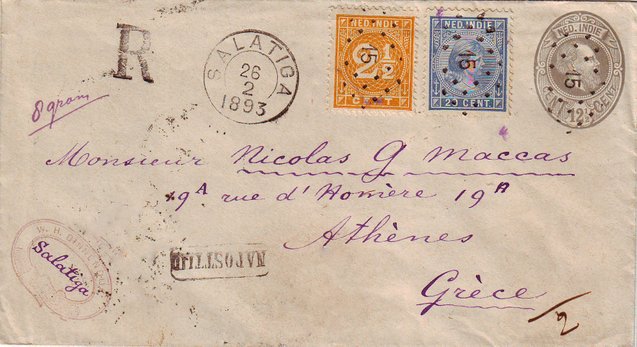 A registered letter sent from Salatiga in central Java to Athens in 1893. The rate for such a letter was 35 cents (25 cents for normal mail and 10 cents for registration). This is an unusual cover for several reasons: it is a very rare usage of a numeral cancel on the Princess Wilhelmina issue and the first recorded cancel 15 on the 20 cents; it is sent to a rare destination; the date 26/2 1893 is the latest recorded use of the Salatiga numeral cancel 15 and it is the first time this cancel is recorded on the 12.5 cents envelope (envelope number 7 according to the Geuzendam classification). Sent from Salatiga 26/2 1893, the letter was sent by way of Suez (27/3) and Alexandria (28/3) and arrived in Athens 31/3 1893 (actually cancelled 19 March according to the Julian calendar which was 12 days behind the Gregorian at the time). The front shows a notation '2' for registered mail, the recorded weight of 8 grammes, as well as the 'R' cancel for registration and the boxed 'na posttijd' cancel to indicate that the letter was submitted too late for the day's collection. For a scan of the back with transit and arrival cancellations click here. 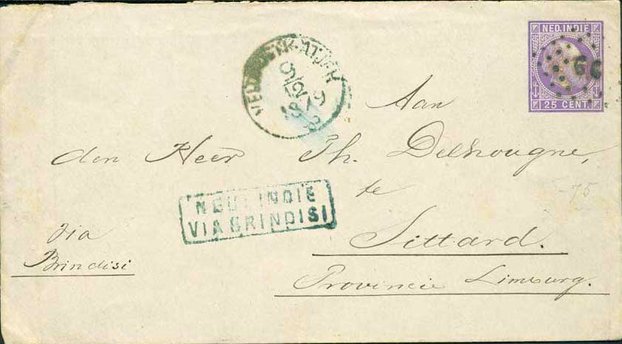