The numeral cancels of the Netherlands Indies

The numeral cancels were introduced in the Netherlands Indies on the 1st of January 1874. They were used by the post offices, the postal agencies of Singapore and Penang, and the expedition office on board the mail steamers. The cancel was commonly applied in black ink, but also sometimes in blue, purple, and (in a rare case) red. The numbers from 1 to 120 are known, used (according to van Leeuwen's Poststempelcatalogus) by 131 different offices and expeditions. The numeral cancels were officially withdrawn 1st April 1893, from which time the square circle cancels ('vierkantstempels' served the dual function of datestamp and obliterator.

The numeral cancellations in use 1874-1893 present one of the most interesting and complex areas of Netherlands Indies postal history. Two recent developments have made this collecting area even more exciting. Firstly, the excellent websites of Hans Kruse and Leo Koning provide a wealth of illustrations and studies of the numeral cancellations and post many recent discoveries. These online resources have allowed a re-assessment of the scarcity of the cancellations and their occurrence on the specific stamps and covers/postcards. Secondly, online trading sites such as Ebay and Marktplaats make a lot of material available and provide keen collectors with an excellent hunting ground. Because a lot of material is now offered up for sale by dealers and collectors from every corner of the globe, rare and collectable items often come to the surface. Also, some of the cancellations and combinations previously thought to be very scarce have turned out to be somewhat more common. One example is the numeral cancels found on some values of the Wilhelmina stamps in use from 1892, which have appeared in quite some numbers. The greater part of my collection has been acquired through online sites like Ebay and these pages show some of my 'finds' in the area of the numeral cancellations. 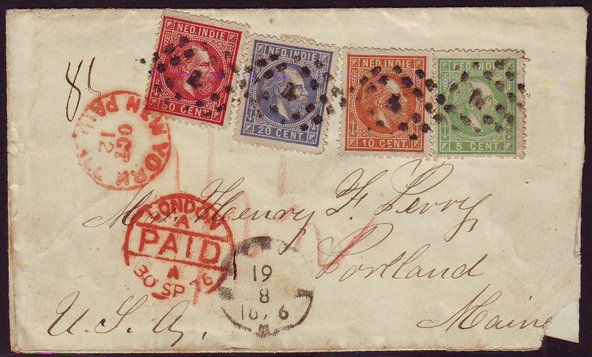 A four-colour franking to pay the 85 cent rate to North America. Sent from Batavia 19/8 1876 via London 30/9 and New York 12/10. The Batavia datestamp and numeral cancel 4 appear well-worn at this stage. There is no arrival cancel from Portland on the back. The total duration of the journey was about two months. The meaning of the two handwritten tax markings '2' in crayon and '8c' in ink is uncertain, but perhaps someone can clarify this? 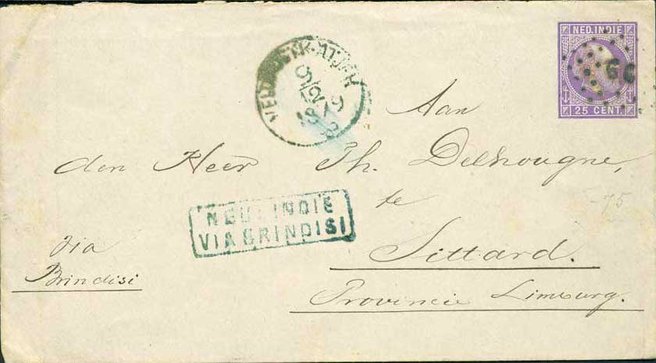 The 25 cent envelope (Geuzendam type 3) sent from the field post office in Atjeh in the northern part of Sumatra. The military expeditions in Atjeh were established in early 1873 to combat local resistance to Dutch rule and received the numeral cancellations of 66, 67, and 68. Personnel there also received free postcards from 1 January 1874, three months before they became available in the rest of the Netherlands Indies. This envelope is cancelled with the rare 66, type 1 (with 40 dots instead of the usual 26) and the datestamp round cancel type Rc (with the flower at bottom instead of office no.). All cancels are in purple, including the routing 'Ned Indie via Brindisi'. The letter arrived in Sittard in the Dutch province of Limburg 8 Feb. 1880. 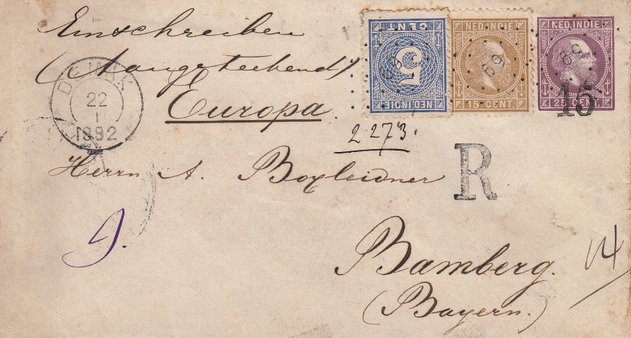 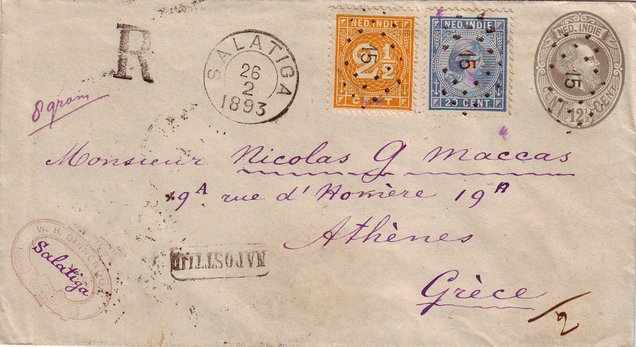 A late usage of the numeral cancel: a registered letter sent from Salatiga in central Java to Athens in 1893. The rate for such a letter was 35 cent (25 cent for normal mail and 10 cent for registration). This is an unusual cover for several reasons: it is a very rare usage of a numeral cancel on the Princess Wilhelmina issue and the first recorded cancel 15 on the 20 cent; it is sent to a rare destination; the date 26/2 1893 is the latest recorded use of the Salatiga numeral cancel 15 and it is the first time this cancel is recorded on the 12.5 cent envelope (envelope number 7 according to the Geuzendam classification). Sent from Salatiga 26/2 1893, the letter was sent by way of Suez (27/3) and Alexandria (28/3) and arrived in Athens 31/3 1893 (actually cancelled 19 March according to the Julian calendar which was 12 days behind the Gregorian at the time). The front shows a notation '2' for registered mail, the recorded weight of 8 grammes, as well as the 'R' cancel for registration and the boxed 'na posttijd' cancel to indicate that the letter was submitted too late for the day's collection. For a scan of the back with transit and arrival cancellations click here. 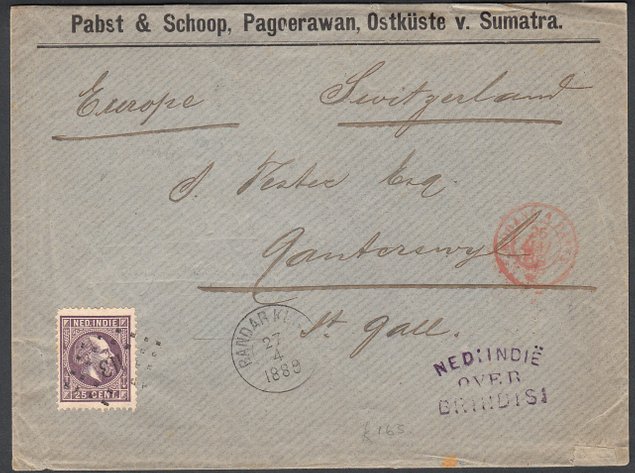 The cancel 113 was used by two different locations in Sumatra, Bandar Klipa (1887-1889) and Tebingtinggi Deli (1889-1893). The usage from Tebingtinggi Deli is not uncommon, but only about five covers have been recorded so far with the number cancel 113 of Bandar Klipa. This one is the finest of the surviving examples. Sent to St Gallen in Switzerland, the letter went via Laboean (also in Sumatra) and the agency of Penang, and was conveyed overland in Europe via Brindisi and the Modane to Paris railway. The routing mark 'Ned: Indie over Bridisi' is of exactly the same purple colour as the Penang small round cancel on the back, so I assume it has been applied here.

I found this cover in the 2015 Asia International Stamp Exhibition in Hong Kong and knew then that it was an unrecorded example of this rare use.